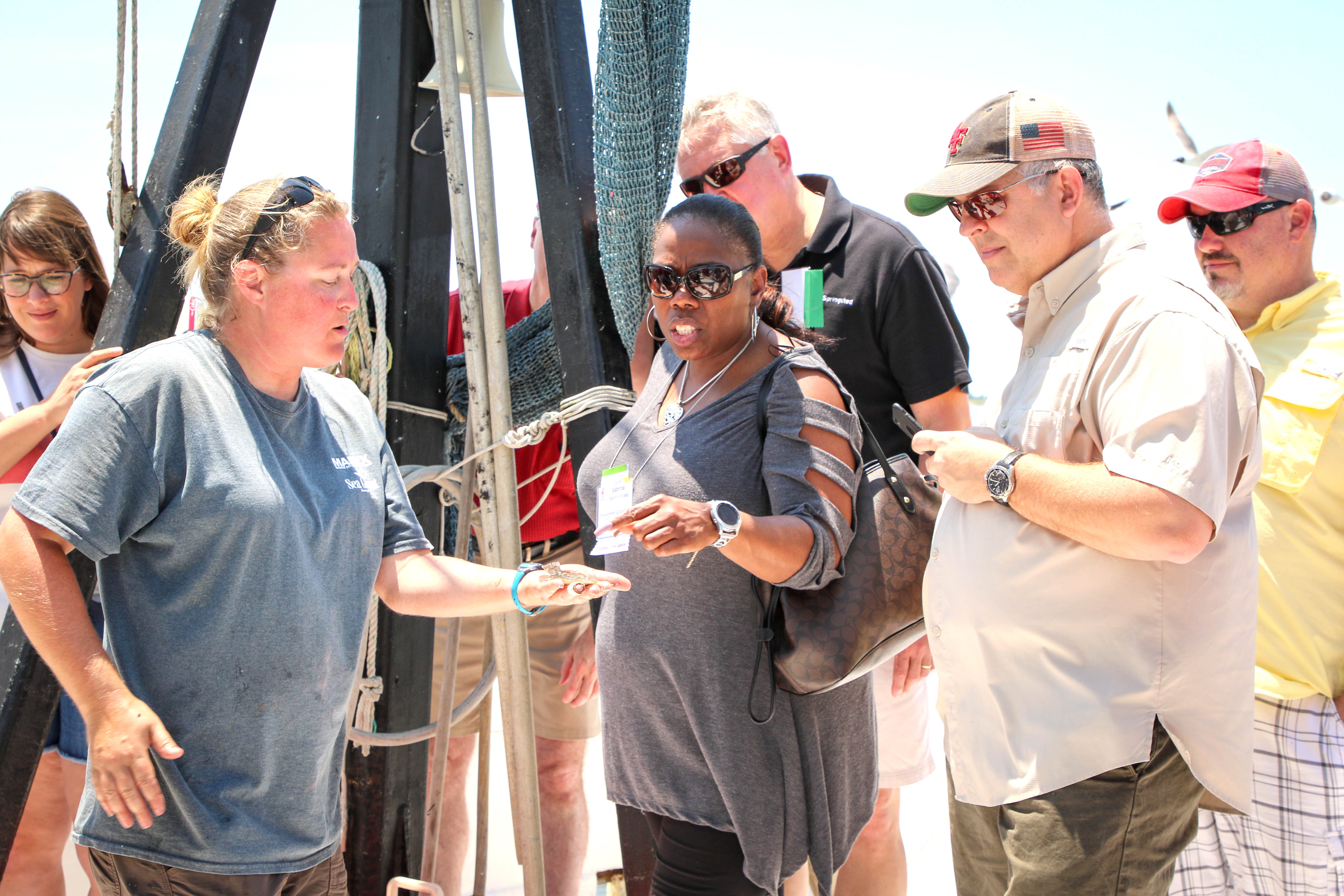 Georgia Inner Counties Economic Development Professionals got first-hand insight into the operations of the University of Georgia Marine Extension and Georgia Sea Grant in Brunswick, and learned how the work done there affects the rest of the state.

Sean McMillan, director of UGA’s Atlanta-based office of economic development, accompanied 23 members of the Georgia Economic Developers Association to Brunswick in May. McMillan hosts the tour to connect businesses and communities across Georgia to UGA’s economic development efforts on the coast.

“This tour impresses the economic development community in Georgia with all the wonderful work that Marine Extension and Georgia Sea Grant done for our coastal communities,” McMillan said. “The faculty and staff here provide the foundations for successful businesses and vibrant communities.”

The tour included a trawl on the Georgia Bulldog, UGA’s 72-foot research vessel. During the St. Simons Sound trip, Marine Extension and Georgia Sea Grant director Mark Risse told the group that his faculty and staff support sustainable commercial fishing and explore options, such as oyster farming, to diversify the coastal economy.

“We are working with shellfish farmers to investigate methods to make oyster farming easier and hopefully attract new farmers,” Risse said. “We are also training commercial fishers on how to collect data on black gills, a condition affecting Georgia shrimp.”

In 2015, Marine Extension and Georgia Sea Grant launched an oyster hatchery at the UGA Shellfish Research Center Lab on Skidaway Island. Hatchery extension workers create oyster spat (young oysters) which they give to local shellfish farmers to grow out. The hatchery has distributed 1.4 million spat to farmers since 2015. With a change in regulations that would allow the use of proper equipment to rear oysters, marine extension workers predict they could produce 15 million spats at full capacity, with an estimated harvest value of $3.75 million to $5.2 million.

The total value of Georgia’s commercial seafood landings in 2017 was $16.8 million, according to Georgia’s Ministry of Natural Resources.

In addition to fishing and aquaculture, the seafood industry creates jobs in the service sector, such as hotels and restaurants that attract tourists, who spend money, boosting the local economy.

“It’s interesting to hear about all the different areas (UGAs) that work in,” said Megan Baker, business retention and expansion project manager at the Fayette County Development Authority. “We are lucky to have this program here because it supports economic development as well as people and the coast.

The Georgia Economic Developers Association is a nonprofit association of professionals and volunteers involved in the economic development of cities and counties in Georgia. GEDA was organized to increase the effectiveness of individuals involved in the practice of economic development in Georgia by encouraging cooperation, the exchange of information and the upgrading of professional skills.

Governor Ivey to Alabama Economic Developers: “The Momentum is on Our Side”

Should economic developers take small businesses off their pedestal – to help…