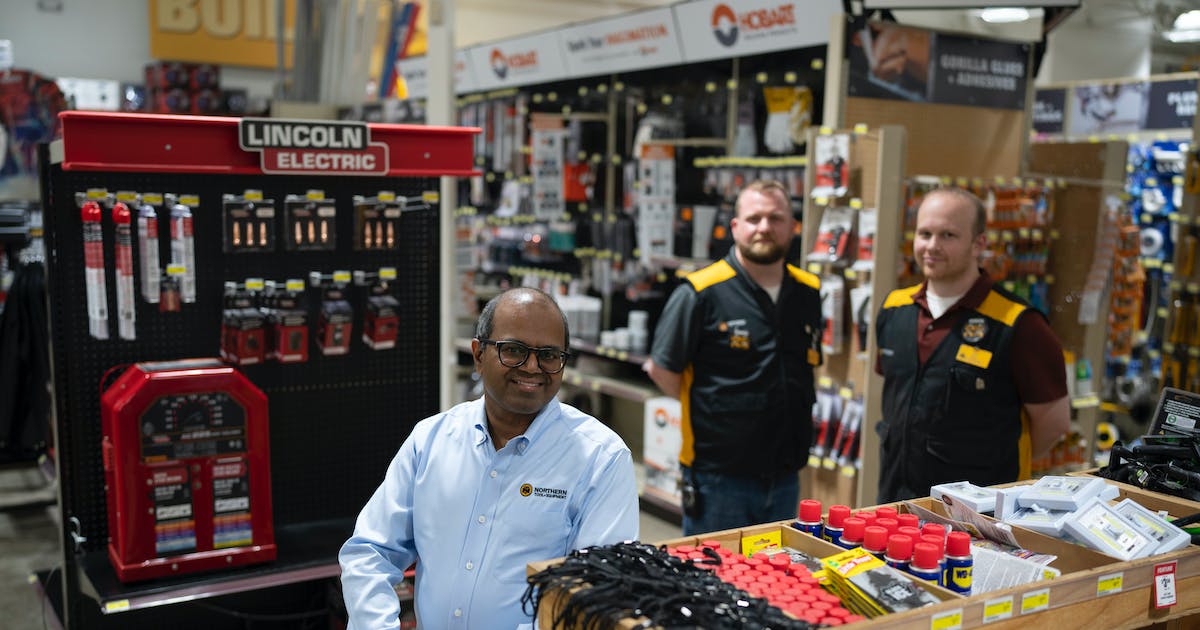 The parking lot at the Northern Tool + Equipment store in Burnsville is packed with heavy-duty pickup trucks, trailers, vans and SUVs.

â€œMost of them are contractors, landscapers, painters, electricians and body shop owners,â€ Krishna said. â€œThey need professional equipment they can rely on.

The retailer’s customer profile hasn’t changed much in the four decades since founder Don Kotula began building mechanical log splitters and selling them in his Eagan garage.

Kotula, who named the company Northern Hydraulics, sold motors, parts and accessories through a catalog with the slogan “Serving Industry and Agriculture”. The first retail store, opened in Burnsville in 1981, called itself the â€œHandyman’s Seatâ€.

Kotula’s sons Ryan and Wade have now set an ambitious course for Northern Tool + Equipment. In the spring of 2020, they hired Krishna, a former executive at Polaris Industries and Sleep Number, to speed up store openings and enter new cities.

â€œBecause we have been so focused on the inside, I have to remind my team that we are now in the big leagues,â€ said Krishna, who spent five years on the advisory board of Northern Tool + Equipment before becoming CEO. .

Northern Tool is by far the smallest team in the league, Krishna adds. The chain has 120 stores in 22 states, mostly in the eastern half of the United States, with clusters in Texas and the Southeast, where contractors and landscapers can work outdoors year-round.

In the Twin Cities, where Northern Tool has 10 locations, Home Depot and Menards each have almost twice as many stores. Northern also competes with Fleet Farm and other farm and ranch retailers as well as specialist equipment suppliers, such as McMaster-Carr and Granger.

â€œWe are not a pure competitor for any of them,â€ Krishna said. â€œWe’re fighting this internally by saying we’ve seen tremendous growth – 35% year over year. Is it because the market is up and all of our competition is up? Or do we all outperform the competition? “

Northern Tool sets itself apart as a manufacturer of its own Made in USA equipment and as an in-store repair shop. Northern Tool technicians service all types of small gasoline powered equipment whether they sell them or not.

Most of the company’s NorthStar tool line, the largest brand in its portfolio, is designed, manufactured and tested in its Faribault plant. At the start of the pandemic, Northern Tool used technology from an existing field sprayer to design a new line of cleaning and disinfection sprayers. The result: Sales of NorthStar branded products increased 30% last year.

With a strong housing market and consumers obsessed with home improvement projects during the pandemic, Northern Tool’s revenue jumped 35% to $ 1.95 billion for the fiscal year that ended in July, a declared Krishna.

The company diversified its sourcing base from China and set up sourcing offices in Vietnam and India, which helped avoid tariffs. Although Krishna refused to reveal his profits and other financial details, he said gross profit rates were up for the year and operating expenses were down. â€œThis validates much of the thinking I had on the potential of the business,â€ he said.

The centerpiece of Krishna’s growth strategy are the stores – many more of them and getting online quickly. By the end of the decade, Northern Tool aims to have over 300 stores.

â€œIn our e-commerce business, we ship to all 50 states,â€ Krishna said. “We have a broader notoriety than our presence in retail.”

While Northern Tool had established itself at a rate of four to five new stores per year, Krishna plans to go deep into new markets, creating eight to 10 stores in one year. On top of that, an equal number will open in strategic locations or in already strong markets, such as Houston, Dallas, Atlanta and Miami.

The first expansion market is the Chicago suburbs, where Northern Tool will open a second store later this fall and continue to grow through 2022.

Adding stores is a capital-intensive strategy that Krishna says will include acquisitions, a reduction in the efficiency of current operations, and a renewed commitment to serving the needs of skilled craftsmen and serious DIY enthusiasts.

To that end, Northern Tool recently sold South St. Paul-based Sportsman’s Guide and Golf Warehouse, a predominantly e-commerce company it bought in 2012 for $ 215 million. The sports and recreation division contributed about 25% of overall sales, but Krishna saw it as a diversion.

In March, Northern Tool purchased Maryland-based Jacks Small Engines, one of the largest online suppliers of parts for lawn mowers, snowblowers and other electrical equipment.

Krishna is just Northern Tool’s third CEO, succeeding the retirement of 36-year veteran Chuck Albrecht. He majored in Mechanical Engineering at University in India and obtained an MBA from Northwestern University.

He has spent decades in the middle and senior management of listed companies, wearing expensive suits, managing income statements and overseeing supply chains in Asia, the Middle East, Europe and the United States.

But he’s comfortable without the tie. He said the work touches his own “blue collar roots” who grew up in Jamshedpur, in eastern India. â€œIt comes home in many ways,â€ he said.

At least twice a month, Krishna visits the shops and warehouses, stopping regularly at the Faribault factory. On these days he tries to get to three or four locations, starting in the morning, having lunch with the warehouse managers, and ending the day with dinner with the regional sales force.

â€œFor me, breaking bread with people is essential,â€ he said. “It’s a sign of personal bonding.”

Customers may have noticed a number of changes over the past year, the most obvious being a larger assortment. Northern Tool stores have grown from about 40,000 items before the pandemic to about 100,000 now.

Krishna and his team have worked with renowned national brands such as Milwaukee and Stihl to expand their offerings far beyond what can be found in most big box stores.

Northern Tool has also forged a new partnership with Rockler Woodworking and Hardware to sell over 300 woodworking products in select stores and online. It was a way for Northern to team up with another Minnesota-based family brand while adding customers who chose new hobbies during the pandemic.

Northern is also developing its own gasless motors, meeting growing consumer demand for power tools. In April, the retailer rolled out its first NorthStar industrial electric pressure washer for agriculture and lawn care or indoor spaces, such as restaurants and factories.

Another consumer trend on its radar: connected objects.

â€œWhen you own a landscaping business and have a team in five different locations, you want to see how the equipment works and how it is being used,â€ Krishna said.

But some challenges are emerging. The pandemic DIY boom has started to subside. Inflation remains a problem and the tight job market is a challenge, particularly as Northern relies on a well-trained sales force that includes specialized equipment.

Krishna said that he and his management team, a mix of veterans and new recruits, intended to build on the entrepreneurial spirit Don Kotula created 40 years ago.

Although the business remains managed by men for a predominantly male customer, nearly 100 women hold managerial positions at the store level.

â€œIt is true that the best years are still ahead of us,â€ said Krishna. “We think we could double in size in the next five to 10 years. We have room to grow.”